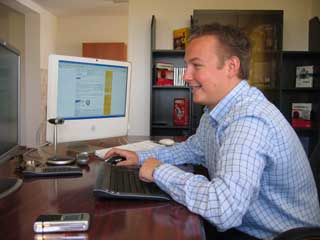 Lucian Todea (photo), owner of the soft32.com website, which is ranked as Romania's top website in terms of visitors, according to the trafic.ro website, says he has received purchase offers for his business, but so far none has resulted into a transaction. Soft32.com became the domestic website with the most Internet hits after softpedia.com was removed from the traffic measuring system. The creator of the most popular website in Romania says he is willing to discuss selling the site, but says he is expecting concrete offers. "It was a month and a half ago that I received the last offer from a foreign company, however, nothing came of it. I am always willing to discuss selling, especially as it is a way to appraise my business. If I were to sell, I would prefer to give up only part of my business, so as to continue my involvement," added Lucian Todea. He specified that soft32.com was the first and most important website held by ITNT SRL, the company which he heads as general manager. For the first half of this year, Todea estimates turnover approximately equal to the same period last year, i.e. 400,000 to 500,000 euros. In 2007, ITNT intends to equal last year's turnover of almost 1 million euros. "Unfortunately, our aim is merely to equal last year's turnover, due to certain developments. Visitor traffic has also witnessed declines and fluctuations. This can perhaps be explained by the fact that there are many other download sites emerging, many of which are simple clones of bigger sites. That is why registered traffic is falling, in particular in terms of downloads," says Lucian Todea.